Your NBA team is down 17 points and there are only 8 minutes left in the game. What is the probability that they pull a comeback and win the game?

It’s possible to answer this using historical data (i.e. in the past, how many teams have won after being in this situation). Given that sports commentators love to provide super specific, seemingly arbitrary statistics (e.g. no team has won Game 7 of an ECF after losing Game 6 by more than 10 points), I knew that I should be able to access the relevant data somewhere and calculate these probabilities.

tl;dr: I did this analysis! Below is a screenshot of the Shiny app I made, which gives a minute by minute breakdown of the probability of winning when facing a score margin of Y points with X minutes left in the game:

For an overview of how I did my analysis, keep reading. Code is available on github.

To download the data, I used the nba_api Python package.1 There are essentially two steps: 1) download game IDs and 2) download play-by-play data for every game ID.

Note that I filter the game IDs to only NBA teams, because some of the game IDs are for WNBA teams. In addition, if you are requesting multiple times from the API, you need to add a delay between requests of about 0.5 seconds (using time.sleep(0.5)).3 Otherwise, you will get temporarily blocked from requesting.

Now once you have the game IDs, you can access the play-by-play data for each game. The play-by-play refers to the table that looks like this, so there is information not only about all the shots that were made, but also other plays like blocks, rebounds, etc. down to the second. In the code chunk below, I show how to download the play-by-play, remove non-scoring rows, and clean up the columns a bit for one game ID. Again, you want to loop this over all your game IDs, making sure to add a 0.5 second time delay between requests. There are about 27,000 games in total from 2000-2020, so it took me about 4-5 hours to download the play-by-play for all the games sequentially on my local computer.

Now we have the data, so we’re basically done!4 As a side note, I just want to mention that using the NBA API was not what I initially tried. Originally, I tried to scrape the data from the ESPN website. This was actually fairly simple to do for one game. I used the R package rvest and SelectorGadget to scrape the relevant columns.

The tricky part was that I needed to know the “game ID” for every game in order to pass the correct URL to read_html. So while I was searching for a solution, I came across the NBA API Python package and ended up using that. But if you already know the URL/game ID and only want to download the play-by-play for that one game, scraping the webpage is straightforward to do as well.

I’ll just quickly describe what my data cleaning steps were below, but the functions I wrote to clean the data are here.

In the end, I get a data frame that looks like the following. Every row corresponds to the time left down to the nearest minute (quarter/minute), the score margin (diff), the empirical probability that the team ended up winning based on the historical proportion (prob_win), and the sample size, i.e the number of games where a team has faced this score margin at the specified time (n).

To display the empirical probabilities, I make a heatmap, where the time left is on the x-axis and the score margin is on the y-axis. The function I wrote for plotting the data can be viewed here. Each tile in the heatmap corresponds to a different row in the data frame. For the playoff games, the heatmap looks like the following.

I make a couple of further adjustments to the plot:

After making these adjustments, I get the following plot. 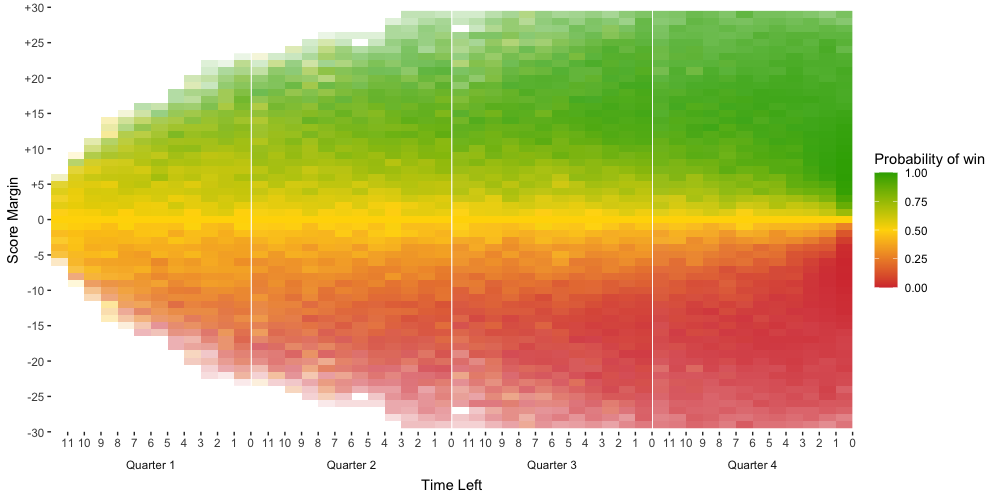 To obtain a nonparametric monotonic fit, I use the smooth.monotone function from fda and weigh the points by the sample size. Below is an example for the case when the score margin = -5. Essentially, I’m fitting a smooth curve to the empirical probabilities on the heatmap for the row of tiles corresponding to a score margin of -5. 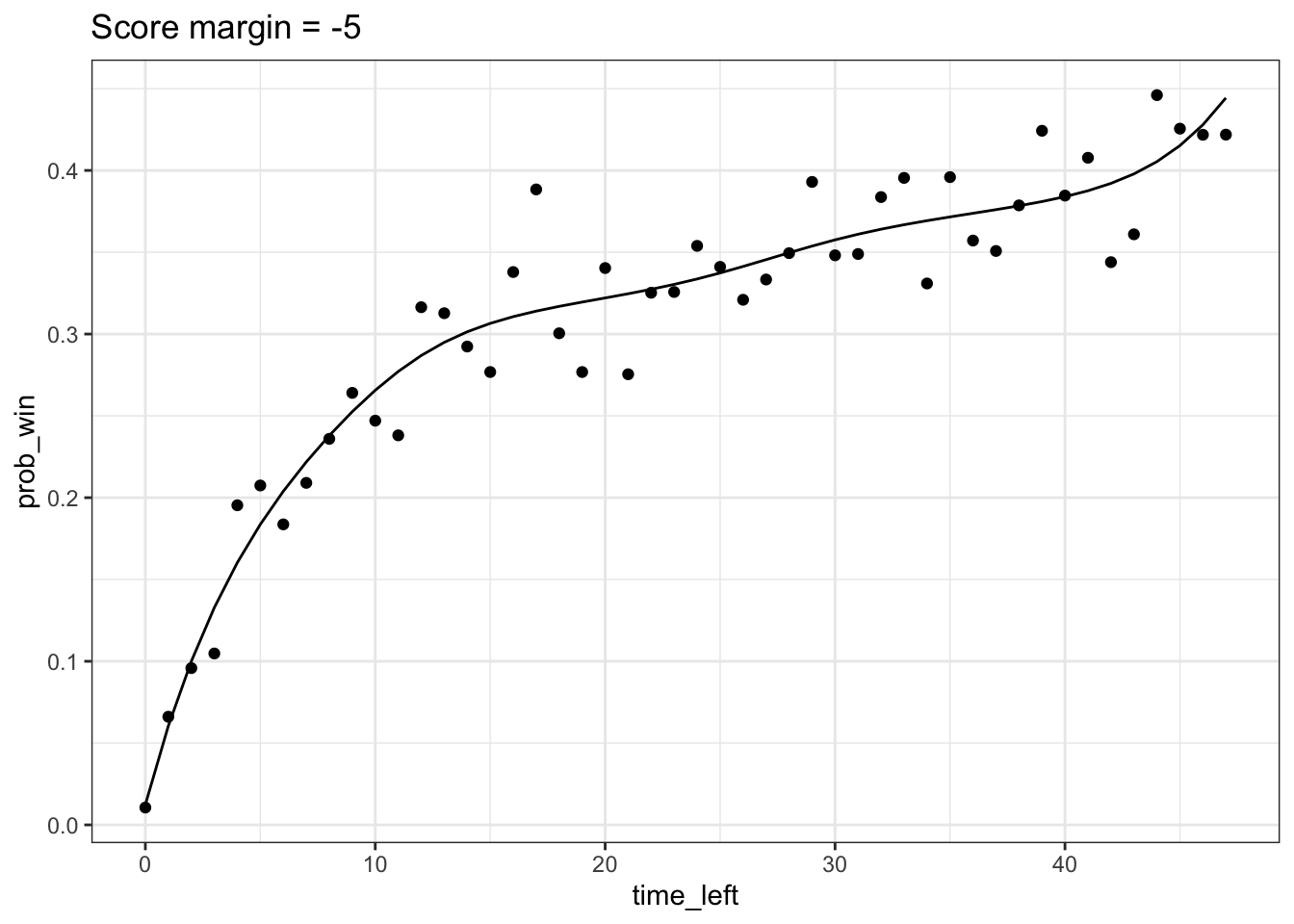 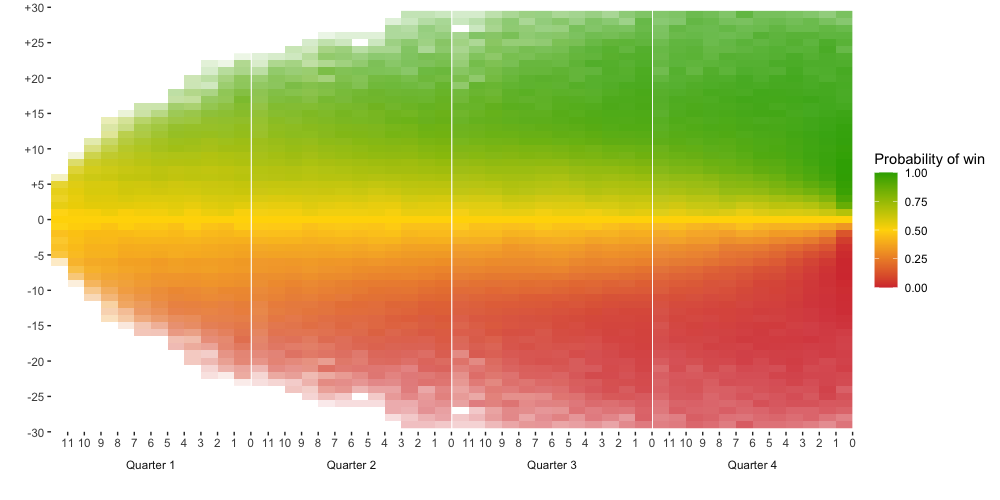 This is a section that you can skip because it didn’t end up working, but I’m writing about it in case I want to revisit the idea in the future.

So before I had finished downloading and cleaning the data, I thought about modeling the probabilities using a binomial distribution, because I was concerned that the data would be lot sparser and noisier than it ended up being. The idea is the following:

Suppose for now that \(p = 0.5\), so I assume both teams are equally matched,6 and that I take \(n\) to be the average number of points left to be scored given that there are \(x\) minutes left in the game. Below is the result for a score margin = -5. 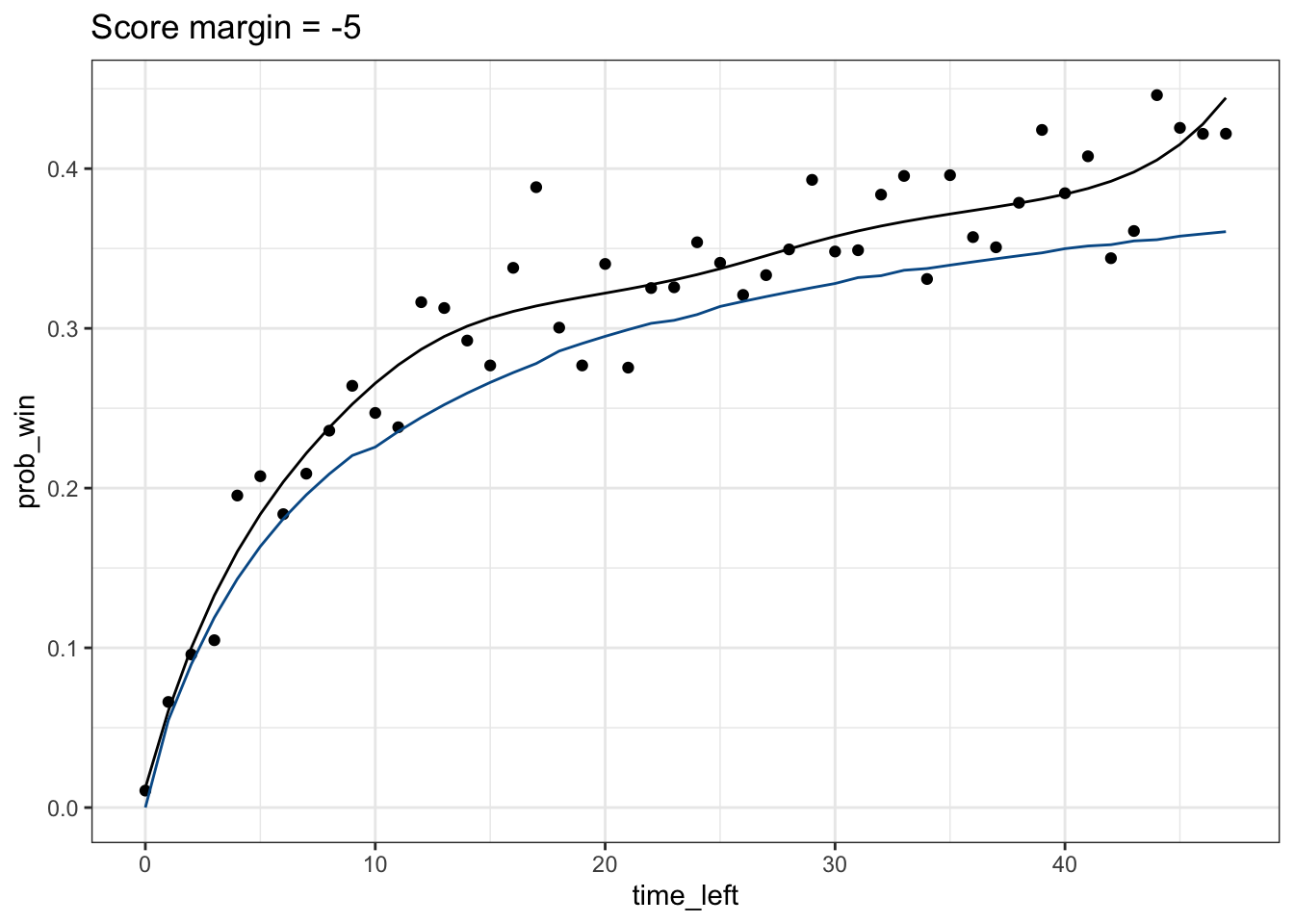 It turns out that the probability I obtain from the binomial distribution is actually systematically lower than the actual empirical probabilities (blue line is the binomial probability, black line is the nonparametric fit), particularly when there are still many minutes left in the game. This is pretty interesting because it means that teams that are behind have, historically, a higher chance of winning the game than if we assume that every point from now on has an equal probability of being won by either team. We can think about why that is. But it also means that the binomial distribution isn’t a great fit to the data, so I didn’t try to incorporate this into the Shiny app.

I package my plots for presentation into a Shiny app, which allows you to choose between displaying the probabilities for all games, regular season games, or playoff games and whether you want to see empirical probabilities or the smoothed nonparametric fits (what I call “model-based” on the app). Hovering over each tile also displays relevant information.

I think what would be pretty cool is if the Shiny app could self-update whenever a new NBA game is played. I wrote some of my code for downloading the data with this in mind. However, I’ll have to think about how to make it more feasible. One problem is that it takes a few minutes to clean the data and calculate the smoothed probabilities right now, which I think isn’t fast enough to reasonably expect someone to wait on while using the app.