Last week, I attended JSM (Joint Statistical Meetings) in Denver. It was my first conference ever, so I made sure to record down my thoughts. Since I wasn’t presenting at this conference, I had the luxury of being able to attend sessions without feeling anxious. And that was really great because I think getting to see what conferences are like before I present at one makes it less intimidating. However, going to talks can also be an exhausting experience. I don’t think I ever felt like I had the energy and focus to attend more than two sessions in one day (~3 hours total).

JSM was held in the Colorado Convention Center in Denver and my first impressions walking into the building was that it was huge! It was easy to get lost (or rather, have trouble finding where something was) at first. I did go to the “First-Time Attendee Orientation” (confusingly held in the Hyatt across the street) and a couple of people gave presentations consisting of advice and info about the conference. But I’m not sure how useful it was, since I was standing in the back of the room, half-conversing with other people, and only heard ~25% of it.

The first session I attended on day 1 was a speed session entitled “Statistics in Sports.” I was looking forward to this session because sports analytics was always something I thought would be interesting to get into. I also thought that speed sessions, where each presentation is 5-10 minutes long, was a great idea, since I often have trouble concentrating for a long period of time at talks. But as I discovered, five minutes is probably too short for a speaker to say anything meaningful. However, all the speakers also do posters after the speed session. So it is probably more useful to think about the speed sessions as an augmented poster session, where the speaker tries to entice you to go to their poster, rather than actual standalone presentations.

The second session I attended was a “Medallion Lecture,” which was one of the special talks given by a featured speaker. The Medallion Lecture I attended was “On Statistical Thinking in Deep Learning” by Yee Whye Teh. Back when I was applying to graduate school, I wanted to study statistical machine learning, so it was interesting to see what someone in that field worked on. Sometimes, I feel like at these invited speaker talks, they end up being too high-level, without a lot substance, but that wasn’t a problem here. In fact, it was rather too technical for me given my (lack of) background. It didn’t help that the mic in this room was unfortunately very soft, which often made it difficult to hear the speaker at all. If you want to read more about what his talk was about, he posted both his slides and an abstract. Since the research I currently do is very applied, his heavily methodological work felt quite foreign. But it was still interesting for me to hear, especially as I’m trying to find my ideal balance between more applied versus more theoretical work. 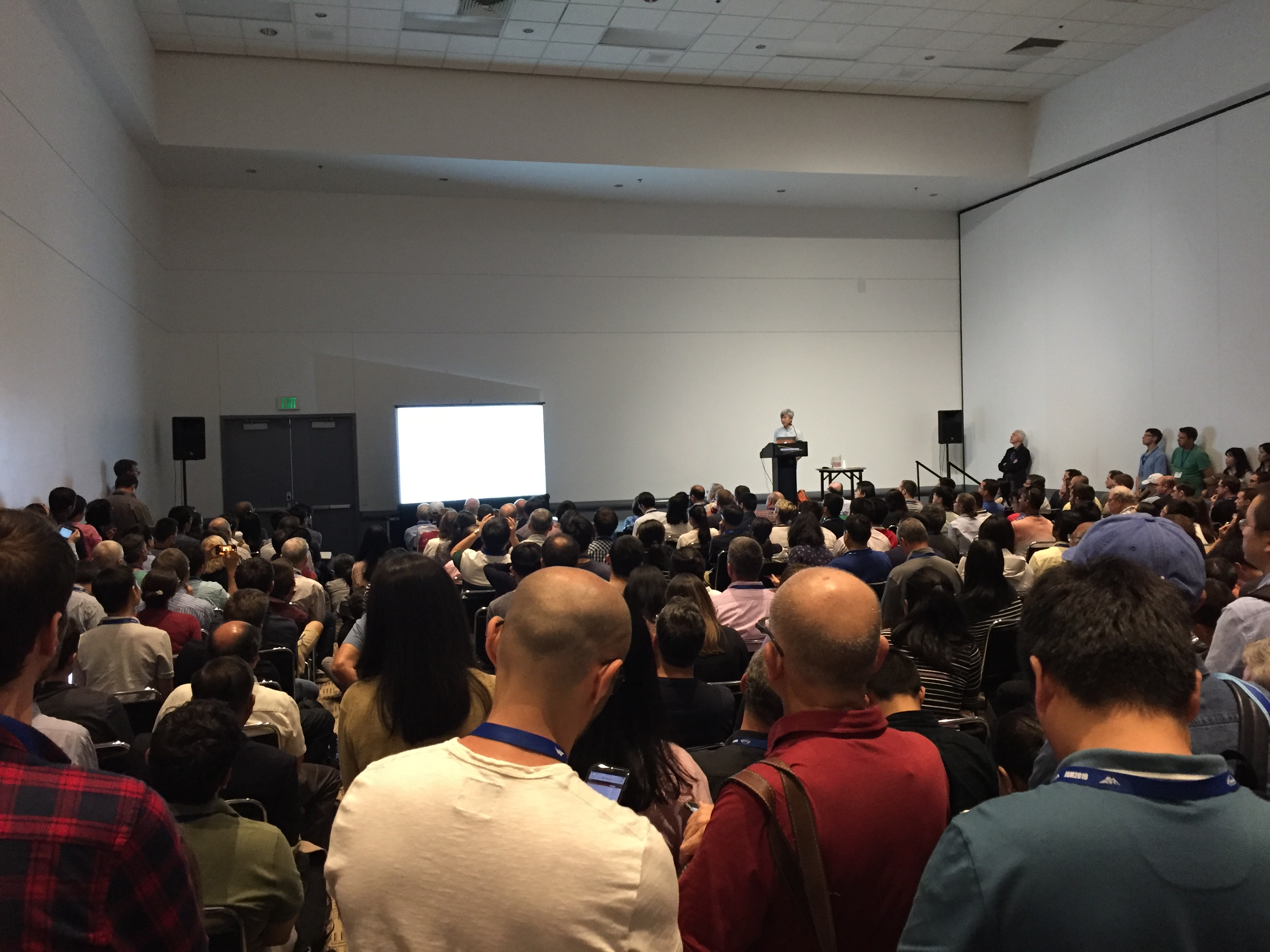 ^ Standing room only at Yee Whye Teh’s talk. Note to self: next time, arrive earlier to a featured talk.

I again attended two sessions: a speed session and a featured talk. The speed session topic was “Statistical Methods for GWAS, Genetics, Genomics, and other Omics Studies.” Overall, this speed session was a more fruitful one for me to attend than the last one, since some of the work presented intersected with my current research. For example, one of the talks dealt with problems with qPCR.1 I remember that in one of the projects I recently joined, we knew that there were issues with PCR, but I don’t think it has been dealt with very carefully, so it’s definitely something I would like to revisit when I get back to Baltimore. More broadly, the various talks gave me insight into some potential research directions – I noted down some names so I could look them up online and skim their papers.

Later in the afternoon, I went to the “ASA President’s Invited Address.” Teresa Sullivan gave a talk called “Coming to our Census: How Social Statistics Underpin Our Democracy (and Republic).” I was expecting it to be similar in style to the one given by Yee Whye Teh, but it turned out to be far less technical and was held in a much bigger venue, with a more formal atmosphere. During her talk, she basically argued for the importance of the census, a relevant topic given the current citizenship question controversy. However, I found the Q&A session after the talk to be more engaging than the talk itself and was a bit disappointed that there wasn’t more actual statistics in her talk, i.e. she talked more about the field of statistics than statistics itself. Given that she called herself a demographer and not a statistician, this was perhaps not unexpected.

Towards the end of the day, I attended the JSM student mixer and got to talk to a few people. I’ve been surprised by how many college students I’ve met at JSM, since I don’t really remember people going to conferences when I was in college. But it sounded like some colleges have established programs in place to send students to conferences, which is cool.

Originally, I was planning on attending a session called “Statistical Methods for Microbiome and Tumor Data.” Then I realized it already happened on Sunday and I had the wrong date. I have to say that planning out which sessions you wanted to go to at JSM wasn’t easy. There were so many sessions that happened every day and I found it difficult to browse through the online program. Anyway, I ended up going to the contributed session “Statistical Methods for Gene Expression and RNA-seq Analysis” instead. Unlike the speed sessions in the last two days where each speaker only got 5 minutes to talk, the speakers in this session got about 15 minutes each. In general, I thought that the quality of the presentations were better than the ones in the speed sessions. However, I still had trouble following more than maybe 50% of the content in any presentation. Unless the statistical method was something I’d learned before in a class or the problem intersected a lot with something I’ve worked on before, it was hard for me to follow in real-time what they were talking about.

I attended the invited session “Statistics on Street Corners”2 in the afternoon. The speakers in this session had a lot of overlap between their presentations – they all talked about visual inference with the lineup protocol. This wasn’t actually a new topic for me because I once watched a video of a speaker who talked about it.3 The basic idea is simple (and pretty cool!): instead of using formal statistical tests to determine whether, say, a trend is significant, you can make a bunch of control scatter plots from a null distribution for which there is no trend and see if you can distinguish the scatter plot of your data from the controls. Because this idea is intuitive and not very technical, the talks in this session were far easier to follow than the ones I attended in previous days. Several of the speakers also did a good job of effectively conveying a story (for example, the talk by Giora Simchoni). I don’t think the work Giora presented was necessarily the most useful or interesting one in the session, but he was able to tell it in a coherent story that flowed well and that made his talk one of the most enjoyable to listen to. 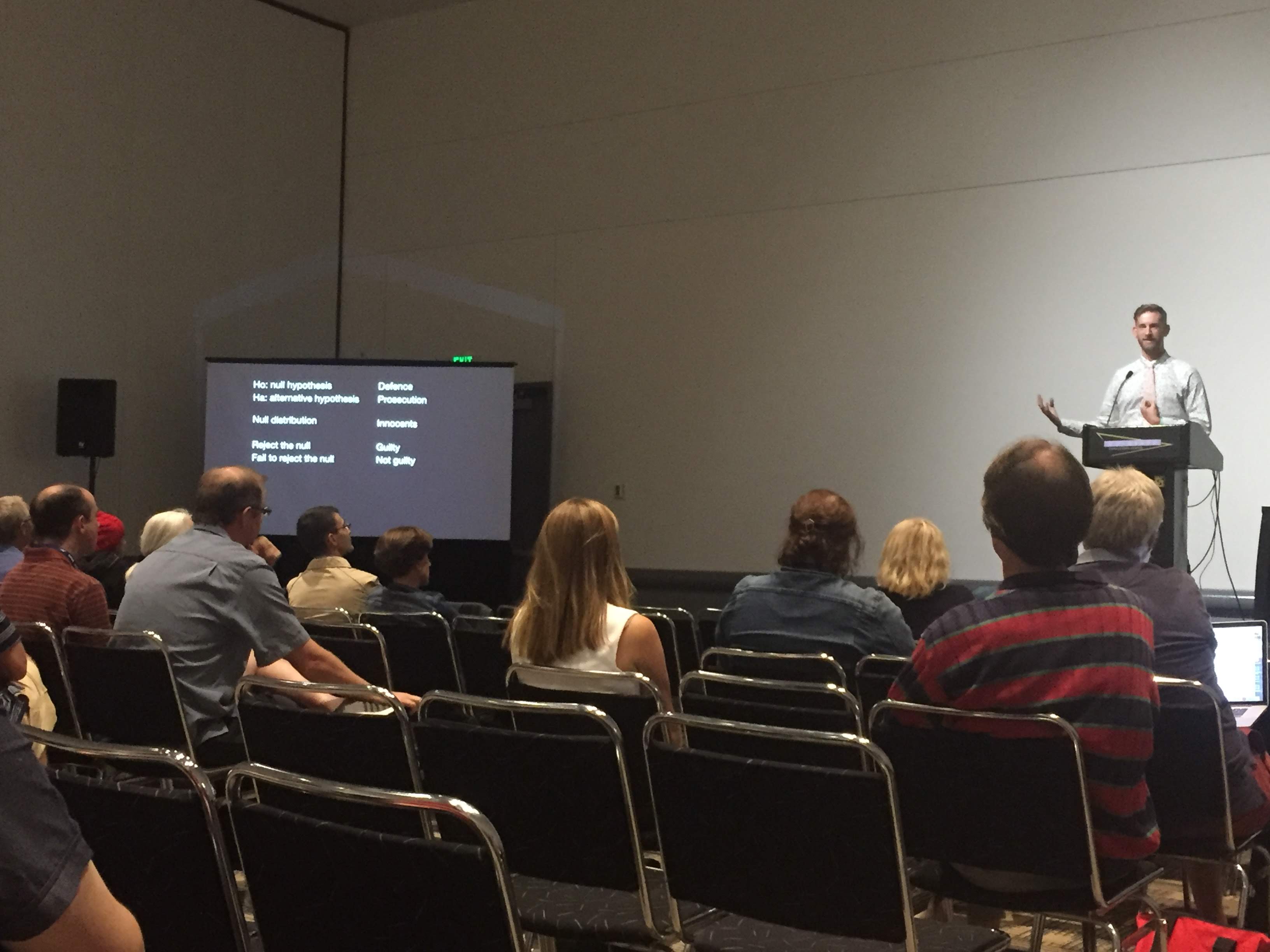 ^ Hadley Wickham of RStudio fame, giving a short presentation about making statistics accessible. One thing he suggested was to frame hypothesis testing more intuitively as a court case – the alternative hypothesis is like the prosecution, so rejecting the null is like deciding someone was guilty, while failing to reject the null (a rather convoluted concept to say) is like deciding someone was not guilty.

On the last day of JSM, I attended the invited session “Statistical and Mathematical Methods in Cancer Etiology and Cancer Early Detection” at 8:30 AM. I wouldn’t normally go to a session that occurred so early in the morning, but it was organized by my advisor and featured other members of our lab. To my astonishment, there were probably a dozen other people in attendance and I was once again reminded that there were actually people in this world who wake up early.4

After attending JSM 2019, I felt like I learned a lot about what to expect from a conference. I think I walked in wanting to get a sense of the range of statistical problems people are working on, but as it turns out, it’s really hard to understand a presentation if I don’t already have some level of familiarity with the topic. I feel like these conferences will become more useful when I have focused on a field, know more about it, and want to see what problems other people in the same field are working on. Having said that, I do think it’s fun to attend sessions on unfamiliar topics, even if that might be less productive.

I think that the range in the quality of presentations at this conference was helpful to see, as it gave me some ideas on what works well (things I should do) and what doesn’t (things I should avoid). Even just watching people handle technical issues5 was a useful learning experience, since I now know it’s really not a big deal and pretty common to have happen.

Next year’s JSM conference will be held in Philadelphia, which I’m likely to attend. Hopefully, I’m able to learn from this year’s experience. Attire-wise, I would advise dressing in layers. It was usually cold in the center, but quite hot outside. The vast majority of people wore some variation of business casual (e.g. dress shirt or polo and khakis), but there were a few in T-shirts/shorts or in suits as well, so I would choose to prioritize the practicality of my outfit over trying to match the median level of formality. I would probably attend fewer speed sessions and more contributed or invited sessions, unless I actually planned on going to their accompanying poster session. I think it would also have been helpful to jot down more than one session per time slot, so that I could switch to a different session if I wasn’t feeling the one I was at. At times during this conference, I kind of wanted to leave a session, but didn’t know where I would want to go instead. Lastly, I think I should try focusing on a few presentations and think of questions to ask them next time.6 My experience this time as an attendee was pretty passive, but now that I have a better handle of what to expect, I can better plan things out next time.